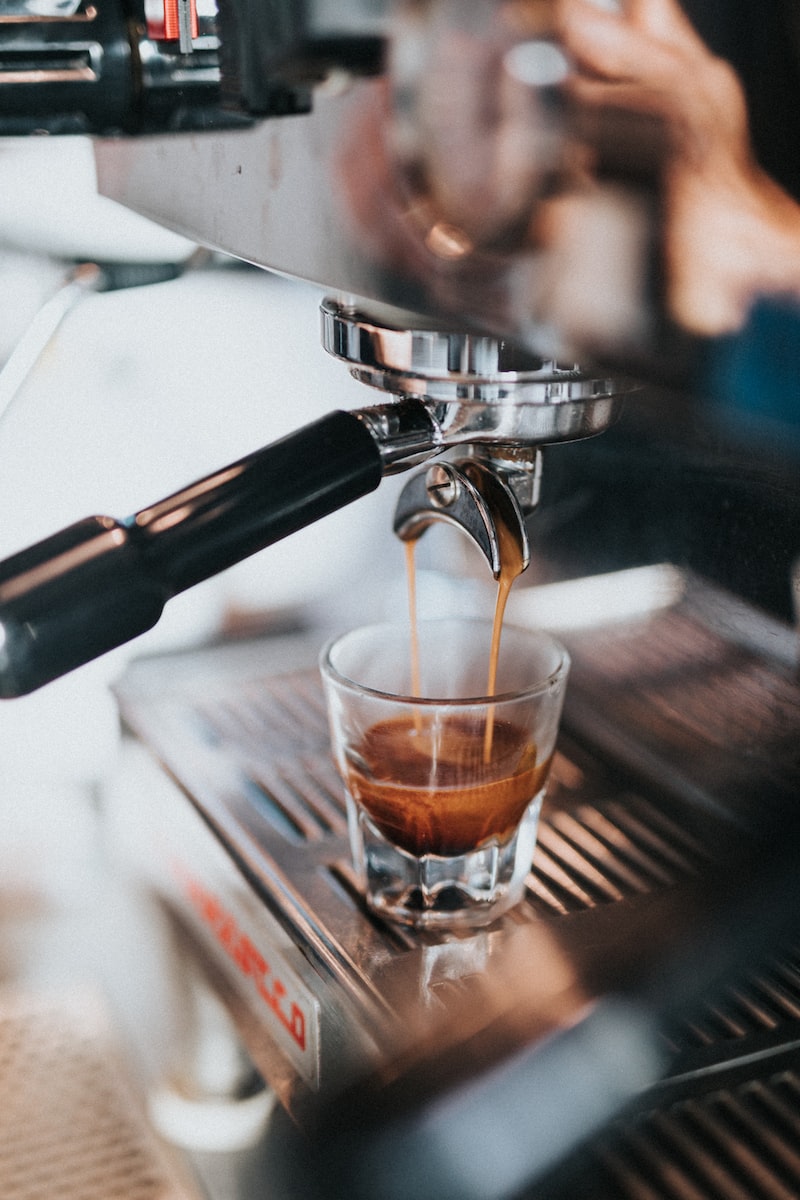 Ordering an espresso should be the simplest thing ever. Even a cappuccino, or a latte, should be simple enough, and you would think that you know how much caffeine that beverage contains. Well, things are not so simple as they seem, and you’ll see why.

I will try in this article to show you how you can find out how much caffeine is in an espresso beverage, whether you order it, or you make it yourself at home. We will also show you how to avoid the jitters, even if you get more caffeine that you expected.

I wanted to start with this, because there is also a little misconception about caffeine and how it affects us. And while a lot of caffeine is not necessarily a bad thing, the way you consume that caffeine is important.

Caffeine is the active ingredient in coffee, and is a stimulant. We think that caffeine helps us wake up and stay alert, but the reality is more complex than that. However, this is the subject of another article.

Not all of us have the same tolerance to caffeine. Some people tolerate caffeine better than other, so there is no perfect caffeine quantity for everyone. However, FDA considers safe to consume 400 milligrams of caffeine daily. Classic Italian espresso contains roughly 50 mg of caffeine per shot of espresso. So in theory, you could down about 8 espresso shots per day, right? Well, not quite. Some of the reasons have to do with how and when to drink your espresso, and how your body processes caffeine.

Espresso is a strong beverage, and it has a lot of caffeine per ounce. Two espresso shots contain about the same amount of caffeine as a cup of filter coffee. Let me ask you this: “Why don’t you chug a whole cup of drip coffee in a single sip?” Here is why, if you don’t know the answer: Too much caffeine at once will make you shake. So it stands to reason that you shouldn’t drink a double espresso shot in 10 seconds. The result is the same. Yet I see a lot of articles promoting this way of chugging espresso, because “that how the Italians do”.

Italians down a single shot of espresso, not two… And just because someone does it, doesn’t mean it’s the same for you. And no, not all Italians take their espresso shot in one sip.

Drink your espresso over a slightly longer period of time, espresso is tasty even when it cools down.

Drink It In the Morning

Caffeine keeps you alert, and this is partly why we drink it. The extra kick that makes us be productive for the whole day is amazing. However, when you get that caffeine later in the day, your body does not have the time to process it, end you end up with a sleepless night.

The average half-life of caffeine in healthy people is 5 hours. So depending on your body’s ability to process caffeine, if you drink a triple espresso shot at 5:00 PM, you might be up half of the night, and have a poor sleep for the other half. You might be fine with one shot only, though.

Before rolling your eyes and officially give up on measuring caffeine in espresso, let’s get into the subject deeper, and see how much caffeine is in an espresso shot, and what other factors affect the caffeine amount in a shot.

How Much Caffeine Is in an Espresso Shot

We said it before, for a standard length, (normale), classic Italian espresso, you will get about 50 mg caffeine per on shot, (1 fluid ounce).

The above measurements are for espresso normale, using Typica coffee beans. Why is this important? Because depending on the recipe, the coffee beans variety, origin, and roast, this number can vary wildly. Let’s see how the above factors will impact the caffeine levels.

50 mg of caffeine in 1 fl. oz. of espresso means a caffeine concentration of 1650 mg per liter of espresso. So what? you ask.

When you ask search engines what’s the amount of caffeine per shot of expresso, the results hover between 51 to 60 mg per fluid ounce. People drink their espresso in many ways, single shot, double shot, or triple shot. So normally a triple shot  search engines, and compare it with this research published in Journal of Food and Chemical Toxicology.

The article reports that research showed that the espresso caffeine concentration range was 580–7000 mg/l measured in coffee shops in Australia. Because we measure concentration, the volume of the beverage doesn’t matter. So what makes these huge differences between espresso drinks?

An espresso is not brewed the same way in every coffee shop. Even the equipment differences matters. For instance, a filter basket for a single espresso can vary between 7 and 9 grams of dry coffee. A 1 fl oz shot brewed with a 9 gram basket will have about 25% more caffeine than the 7 gram basket. Some baristas like to us a bit more coffee in the basket and tamp harder. This could add some caffeine to your shot.

The Type of Coffee Beans Used

The caffeine content in an espresso shot will depend on how the beans were roasted. The roast could also play a role, the darker the roast of a coffee the more caffeine is burnt, hence a lower caffeine content. On the other hand, dark roasts are more soluble than lighter ones. Depending on the recipe, we could end up with more caffeine from a dark roast, even though they contain less.

Ristretto vs Lungo vs Normale

Recipe again… You  are trying to see which espresso recipe contains more caffeine. The only way to know that is to calculate, and again, this depends wildly on the barista’s recipe.

All things equal, from the same amount of ground coffee, a lungo has the most caffeine content, followed by normale, and ristretto has the least amount of caffeine. But the beverage length varies a lot. So a classic lungo is a 45 – 60 ml of espresso, a normale is around 30 ml, and a ristretto is around 20 ml.

When we extract 7 grams of dry coffee into 60 ml of water, the coffee we get is more diluted, but contains slightly more caffeine. Ristretto might feel very strong and can give you jitters easier than a lungo, but not because of the caffeine content, but because you might drink it too fast. Here is the ristretto recipe, if you want to learn how to make one.

So how much caffeine is in a long espresso shot? No clear number here, but the caffeine extraction is way more efficient than a normal shot. So for a two fluid ounce lungo, you could get as much as 70 mg of caffeine, which is on par with drip coffee. In theory, you shouldn’t get more caffeine from a lungo. But because coffee shops don’t follow recipes strictly you might end up with more caffeine in your cup. The classic lungo recipe calls for a 20 to 30 seconds extraction, and a grind size tweak to compensate for the extra liquid volume. But coffee shops often adjust the volume by extending extraction over the 30 seconds, which means more caffeine extracted into your cup.

Have a glass of water with your espresso, it helps mitigate the caffeine rush. And sip your coffee slowly, you will enjoy it more.

This one is pretty simple, if a single shot has 50 mg of caffeine, a triple shot will have almost the triple. Why almost the triple? Extracting a triple shot is less efficient than extracting a single. The puck height, the larger dry coffee quantity lead to a slightly less efficient extraction. Don’t get caught up in this too much, it’s still better than pulling three shots back-to-back.

So caffeine in a triple shot espresso should be about 140 mg if all other things are equal. A double espresso shot will have around 95 mg of caffeine.

Is Espresso the Most Caffeinated Coffee?

Yes, by volume, espresso contains the most caffeine content per ounce.

As we saw, an espresso has anywhere from 40 to 60mg of caffeine per fluid ounce. So one shot of espresso is comparable to around half a cup of drip coffee, in terms of caffeine content. Yet we have espresso which is one ounce vs drip 4 ounces.

French press is closer to drip coffee in terms of levels of caffeine per ounce.

The only coffee that is as caffeinated as espresso is Turkish coffee, but even Turkish coffee is brewed at different strengths, with variants that are closer to drip coffee than to espresso.

There is a misconception that espresso has more caffeine than coffee. This is not true.

In espresso we aim for a short extraction to avoid bitter compounds. The extraction process for filter coffee allows more tannins, and more caffeine in the cup, but these are very diluted so the cup doesn’t taste as bitter.

Espresso-based drinks are probably the hardest to know the caffeine content, unless you get that from the coffee shop. Some drinks are made with one shot of espresso, some are made with two shots. Sometimes the 1 fl. oz. espresso in the recipe is not a solo, but a doppio.

Garrett Oden has a piece on single vs double shot, and he describes how the definition of a double shot can be pretty lose.

The point is: caffeine levels can vary a lot from shop to shop when buying a milk-based espresso drink.

I know that this might sound a little controversary, but for those who a caffeine sensitive, some extra cream in the espresso will mitigate the side effects.

Fat slows down the absorption of the caffeine, and it will spread that amount on a longer period of time. This is the concept of the bulletproof coffee. If you are on a diet, make sure you calculate the calories from the extra cream.

And by the way, Italians don’t drink cappuccinos in the afternoon. They consider this a morning treat.

Unfortunately, it is almost impossible to know how much caffeine is an espresso drink. There are too many variables in play, and espresso is not as standardized as normal coffee. As we saw, we have to take in consideration a lot of factors including:

If you prepare your espresso at home, using the guide above you can have a great estimation, but if you get your beverage in a coffee shop, it’s going to by trial.