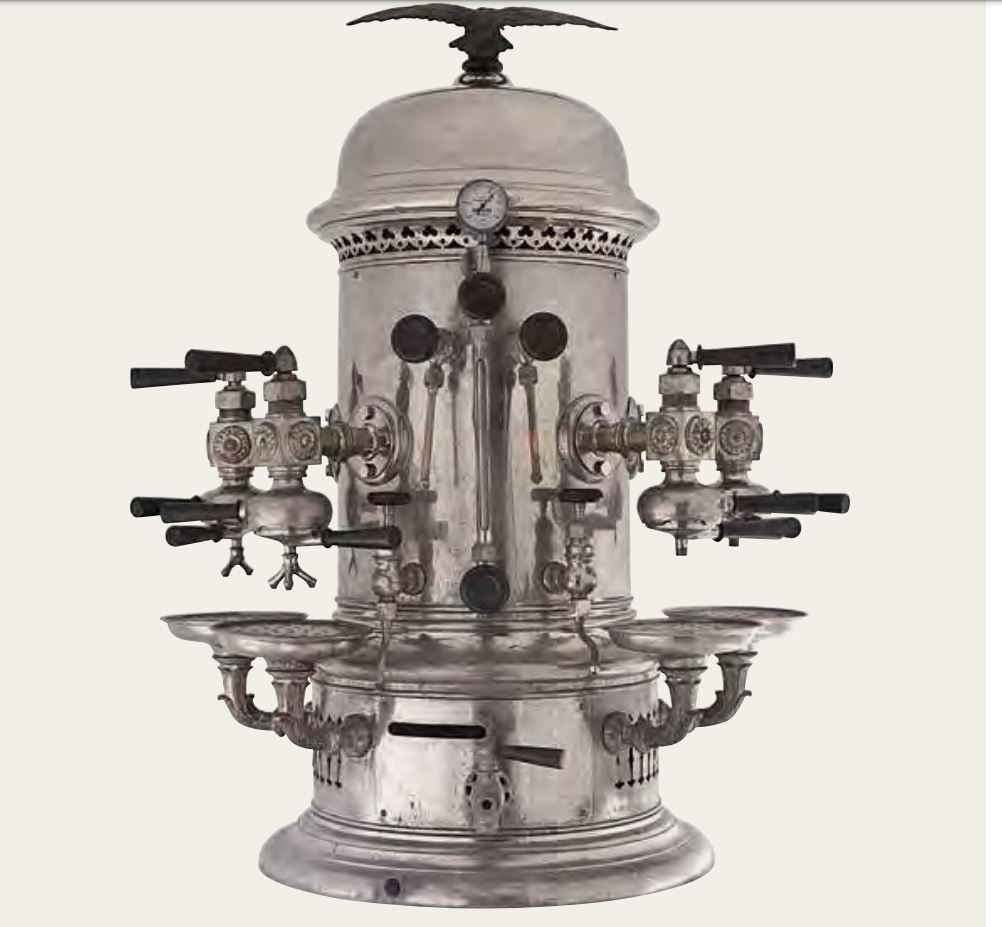 We love espresso. We accept other variations, such as Moka pot, drip, AeroPress, but really what moves us is the sharp flavors of an espresso shot. But espresso is relatively new in the humanity’s history, and we owe this little gastronomic wonder to the Italians.

But lets take a look and see how this amazing coffee beverage has become what it is now, and how it changed in time.

The history of coffee is fascinating, exotic. The word coffee derives from the Turkish pronunciation qahvé, from the Arabic qahwah. Qahwah was the word used for wine, (or perhaps an exciting drink).  Towards the end of the XIV century migrated from Yemen, and it named the drink made with coffee beans.

Many European languages, such as Czech, or Croatian are still using this name: kava.

The coffee plant draws its origin from Africa, from the Ethiopian region of Caffa. And the legend tells us that a Shepperd monk named Kaldi was the first to discover the effects of the miraculous plan, when his goats ate coffee cherry. The legend says that the goats were dancing, after consuming the invigorating fruit.

Coffee entered and spread to Europe through Venice. Taking advantage of the good relations that the city had with the Arab world, Venice maintained the monopoly of the distribution of coffee throughout Europe until the 17th century when the Dutch spread the production of the coffee plant.

There are many ways to make coffee: the ingredients are always the same, water and coffee. But what makes the difference is the way of extracting substances and aromas, that is the way of preparation.

From the boiled coffee, the oldest, to the Neapolitan or home-made moka, to the “American” filters, or the Turkish coffee which fascinates by its ritualistic preparation. The famous rites and rhythms of the east …

In the 19th century, coffee was taking long to prepare. Not much longer than today, but at the time, a busy restaurant could make more money, if they could serve more customers.

This is how the “instant coffee preparation” method was born in Turin in 1884. Angelo Moriondo invented a a machine to brew coffee in record times, and patented it with the patent n. 33/256 in May 16, 1884. He followed up with an other patent in November 20, 1884 vol. 34 n. 381. The invention was then covered by an international patent through registration in Paris on 23 October 1885.

The instant coffee machine, (the original name was la macchina del caffè istantaneo), was much different than the present day’s espresso coffee machine and the result in the cup was less stellar. However, this was the first time pressure was used to speed up the brewing process.

This machine used steam pressure to force the water into the brew chamber where the steam extracts coffee solubles.

Moriondo owned a coffee shop, and the new machine would help his business thrive. The machine was a great success, and it even got its song composed by Marziano Cantone: “Caffè Istantaneo”.

Even though the ancestor of the espresso machine was not the perfect coffee brewing method, it was the inspiration for the subsequent series of inventions and improvements that brought us the black nectar of gods, as we know it today. Sure, Moriondo didn’t quite nail the marketing aspect as his successors did. His choice of a name for the coffee was a little confusing – “caffè istantaneo”, and his machine had  a few things to improve on. The machine was conceived as a bulk brewer, and never got the traction it deserved.

The Next Espresso Machine – Luigi Bezzera

It was in the 20th century that humanity caffeinated via a real espresso machine, but the start was ever so timid.

The Milanese Luigi Bezzera patented his coffee machine in 1901. This was just as Angelo Moriondo’s first patent had expired. While Bezzera’s machine reminded clearly of Moriondo’s invention,  it did bring a few innovations and improvements, including the single filter holder handle. We are still using the portafilter in today’s espresso machines.

This new machine would brew into the cup directly, and it was a single serve coffee maker, rather than a bulk one.

Bezzera’s patent was then purchased by Desiderio Pavoni who founded the La Pavoni company and scaled the  production in a workshop in via Parini in Milan. Pavoni also also coined the term “espresso”, which was chosen to suggest a very fast preparation. The word espresso has multiple meanings in Italian though.

The improved machine and the beverage it produced were presented at the 1906 Milan Fair were it was a hit. The duo introduced to the world the “cafeé espresso“.

The first coffee machine equipped with a steam wand, was Pavoni’s “La Ideale”. La Ideale was capable of heating and steaming milk, which partially contributed to the success.

Up until the 1920s, espresso, or previously caffe isantaneo, were popular in Italy only, and they would sell very little outside of the country. Espresso was still burnt, because the steam was too hot. The pressure obtained with the machines was no more than 2 bars. So coffee obtained with the Bezzera-Pavoni machine was very fast to brew, but nowhere near the flavor we get today.

Turin-based Pier Teresio Arduino, inspired by the new developments in the coffee industry, developed his own steam based coffee maker in 1910.

The technical experience from school and the experience working with locomotives during his military time helped Arduino conceive a refined coffee machine – La “Victoria Arduino”.

While these coffee makers were essential in the development of the modern espresso machine, they were larger and more sophisticated versions of the present day Moka pot.

Finally, a milestone in the evolution of coffee preparation, the invention of 1938 by Achille Gaggia, a Milanese barista, surpassed the use of steam, the technology of the machines produced up to that time, and introduced a system of pistons that push hot water through the ground coffee.

Antonio Cremonese, a bar owner in Milan, also tried to improve the espresso coffee machine during the same time. He manages to design a machine that creates pressure for the espresso extraction, without using the steam pressure: «Rubinetto a stantuffo per macchina da caffè espresso» (patent 343.230). This was a machine that used a tap to push a piston to create the needed pressure in the coffee bed.

Gaggia who met Cremonese many times and discussed about improving the steam coffee machine, recognizes the importance of the invention and purchases the patent from Mrs. Rosetta Scorza the widow of Antonio Cremonese.

This is the moment the industry abandoned the steam technology and moved on to the modern espresso. the creation of the first coffee cream. In the same year Antonio Cremonese died prematurely and Achille Gaggia bought the patent from Vedova, Mrs. Rosetta Scorza.

The invention was epochal and Achille Gaggia’s work from that moment on was to improve it and make it compatible with mass production.

In 1947 Achille Gaggia registered a new patent where he introduces the lever style espresso machine that pushes the water through the coffee grounds with 9 – 10 atmospheres. The high pressure and the low brewing temperature lead to perfect espresso extraction typical to modern espresso. This espresso coffee machine was presented in 1855 at the Paris Universal Exposition.

The machine was lever operated, and the barista had to pull the levers in order to create the pressure in the coffee bed.

The lever machine brought the coffee shop jargon along. The baristas coined the term “pulling a shot” of espresso while operating the spring-loaded levers.

The anecdote says that when Gaggia’s first machines hit the market, customers were unsure about the “floating scum” on top of the coffee. Crema was not know at the time, because the lower pressure machines could not produce it.

There is nothing a little smart marketing can’t fix. So Gaggia started to call their coffee: “caffe creme“, which implied the cup was of a great quality. So much so that it had its own creme.

The next revolution in espresso machine happened in the 1960s when the piston machine fell out of the customer’s grace. This is when Ernesto Valente invented the Faema E61. The E61 was the first machine that used an electric pump to create the pressure, but that wasn’t the only innovation brought by Valente.

Faema E61 heats the brewing water inside a boiler and from here, the pump sends it through a heat exchanger, to the group head where coffee extraction takes place. The heat exchanger was a great way to control the water temperature so that the shot doesn’t get burnt. The E61 brew head is still one of the best on the market, and used by many espresso machine manufacturers.

The E61 was a great success and is one of the most influential inventions in the espresso history.