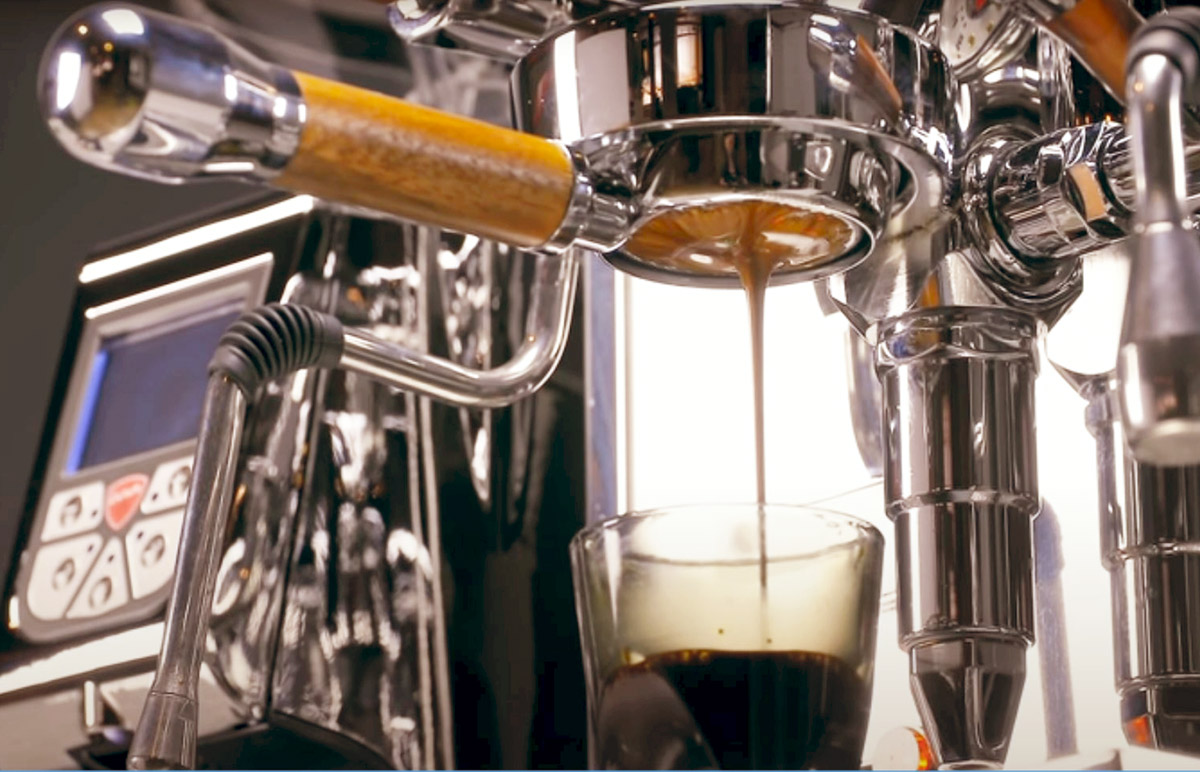 You just pulled your espresso and the taste is not quite right. The shot is “missing flavors”, doesn’t have body, and you some sourness and bitterness that shouldn’t be there? This is likely because of the channeling.

Channeling happens more often than you think, when brewing espresso. Most of the time the shot is passable, so we do not notice it. The good thing is that it’s pretty easy to troubleshoot and fix espresso channeling, and it only takes a few extra seconds to your shot prep routine.

In this article we will show you how to identify if your shot is channeling, and what to do to fix it.

This article is rather technical, and it is aimed at coffee lovers who want to pull the perfect shot. If you are happy with your espresso, this article is not for you.

What is Espresso Channeling?

Espresso channeling is an uneven flow of the water through the coffee grounds puck, when water finds a narrow path instead of flowing through the entire coffee bed evenly.

When you have 14 grams of coffee in the basket, you want the water to pass through the whole 14 grams of ground coffee and extract the 14 grams evenly.

When water finds a weak point in the coffee bed, will create a channel.  Then water will flow faster through that channel, and slower through the rest of the puck.

This combination of over-extracted and under-extracted coffee will result in a cup that is weak and sour, but also overly bitter.

Coffee extraction is the process of dissolving compounds from dry, roasted coffee in water to create a coffee drink. We can dissolve more, or less compounds and by modifying brewing variables we can selectively extract desirable compounds.

The ideal Extraction Yield range is between 18% and 22%. When we extract out of this range we get the following two cases:

When we have channeling, we get some brewed coffee over 22% EY, and we get some coffee that under 18% EY. So we get the sour flavors of under-extracted coffee, and the overly bitter flavors of over-extraction.

We will come back to this later in the article, from a different angle, but if you want a thorough explanation, this article is a great deep dive into espresso extraction and brewing variables: Extraction and Espresso Brewing – A Guide to Coffee Perfection.

There are a few causes for channeling, including poor coffee distribution, side tamping, and uneven grounds saturation with water. Let’s review these causes and see how we can avoid channeling in each case.

It’s not unusual for the portafilters to be filled unevenly when transferring the coffee grounds. Because of the fine grind, coffee will tend to stick in mounds after being transferred in the portafilter. When you tamp, the mounds will be tamped harder, and will have a higher density, hence water will pass though slower. The less dense areas will be the path of least resistance, allowing water to flow faster.

This type of uneven distribution is very common, and it affects the quality of your shot considerably. There are large volumes of coffee that will be under, or over extracted.

Static and grind size cause another problem – clumps. The clumps are little boulders of coffee grounds that stick together, rather than separate when poured into the portafilter. This happens because of the static, fine grind size and coffee oil. The more oily the espresso beans, the more clumping there will be.

Clumping looks dramatic, and the first thought is that it’s really bad for the extraction. In reality, these are little islands of under-extracted coffee, and many times pre-infusion partially fixes it, since the affected volume is so small.

How To Fix Channeling Caused by Poor Coffee Distribution?

Simple answer: do your best to distribute coffee evenly in the basket.

If you don’t want to invest in espresso distribution tools, you can use distribution techniques, which I described more in my tamping tutorial. If you need a shorter version of that, I recommend knocking the portafilter on the sides, and tapping it on the counter so that coffee gets evenly distributed.

The WDT tool is an espresso accessory, that functions as a rake, to help you distribute the coffee grounds evenly, in the deeper layers of the puck, and will also break the coffee clumps.

I personally recommend using both tools as part of your coffee puck prepping routine. At the minimum, you can use a a paperclip as the raking tool. Maybe it won’t be as efficient as a purposely built raking tool, but it will work.

Side tamping causes side channeling, which is the most common type of channeling. I talked about this extensively in my article: How To Tamp Espresso, and I recommend you that article, but I will briefly explain here how that is a problem.

When you prepare your coffee puck, you have a perfectly distributed coffee bed, ready to be tamped. Then all of you prepping work is ruined by pushing the tamper harder on one side. What’s worse is that many times you can’t even detect the side tamping, because it’s not obvious. A tiny slant to one side or the other will affect the flow of water.

1 mm height difference in the puck will be enough to cause uneven extraction. You will over-extract the lower side of the puck, and under-extract the tall side.

How to Avoid Side Tamping

The easiest way to avoid side tamping is to get an self leveling tamper.

The self leveling tamper gives you the best consistency. It is an expense that is worth, in my opinion, because even the most experienced baristas will get a side tamping from time to time.

A palm tamper is a poorer version of the self leveling tamper, but if you budget is low, it is an acceptable compromise.

Finally, adjusting your technique. This is the cheapest solution, but the hardest to achieve. You will have to adjust your tamping technique so that you avoid pressing harder on one side of the basket.

Grinding too fine is not a channeling cause on its own, however, when grinding too fine we amplify any preparation defects. When you grind extra fine, the puck is very dense and water has a hard time flowing. By grinding very fine we almost encourage the water to find the “path of least resistance” through the puck, forming channels.

Although many baristas recommend using a slightly coarser grind, there are some advantages of grinding finer. I would recommend beginners to stick with “proven grind size”, in order to minimize the risk of channeling. However, for experienced baristas, who know what they are doing, playing with the grind size, and exploring finer grinds, is a must if they want to achieve espresso perfection.

It looks like from time to time there is random uneven saturation of the coffee grounds. Some attribute this to the shower screen, which has too few holes, and water pours in large streams. The grounds that were firstly touched by water are going to be better saturated with water, and thus will extract more.

Others think that when water firstly touches the coffee puck, disturbs the perfect coffee bed, creating small craters. These notches then become the point of least resistance, and lead to channeling.

There is no consensus about the real reason the puck is not evenly saturated with water, but there is consensus on how to fix that.

How To Fix Uneven Grounds Saturation

There are two things that can help to saturate the coffee puck uniformly, pre-infusion, and the puck screen.

The puck screen is a piece of perforated metal, or a paper filter that sits on top of the coffee bed. The role of the shot screen is to prevent disturbing the shot, and to encourage a uniform distribution.

The pre-infusion is a gentle introduction of water, at a lower pressure, just before the espresso machine pump kicks in and pushes the water at higher pressure. Pre-infusion allows the coffee bed to absorb water slowly, giving the grounds a bit more time to swell, and rearrange in the coffee bed.

The puck screen is a more complex discussion, and if you are interested in a scientific explanation, this inconspicuous post on Barista Hustle, has it.

Low Dose in the Basket

Using a lower than the manufacturer recommended coffee dose will lead to channeling. This will decrease the brewing pressure during extraction and leave too much head space in the basket. The top of the coffee bed will get too wet, and increase the chances to get channeling.

Always use the dose as recommended by the basket’s manufacturer, and measure your coffee beans on a scale.

How to Identify Espresso Channeling

There are two ways to spot channeling, by taste, and visually. Note that in most cases the inspection is reactive. You pull a shot and then evaluate the results, and try to understand the reasons for the channeling, so that you can fix the next shot.

The inspection of the coffee bed before the shot is the only proactive way to avoid channeling, but most of the times this is not obvious.

By taste is the obvious one, if your shot has too much sourness and bitterness, it is very likely due to channeling.

Visually, you can inspect the spent coffee puck, after you remove it from the portafilter, and look for little notches in the puck. If you see holes in the puck, those were points of the least resistance during the extraction.

Use a Bottomless Portafilter

As the coffee is pouring out of the basket, you can watch the naked portafilter and note how the espresso is flowing through the filter. You can tell if you have channeling if:

Channeling is a problem that every barista will encounter. If you want to consistently pull delicious espresso shots, follow our guide.

Don’t get discouraged if you fix one thing and then something else get wrong. The more problems you encounter the more experience you get, until you become a seasoned barista.

It might seem like a long list, but if you aim for espresso perfection, this is a must. Get a great tamper, and distribution tools, and use a screen shot. And don’t forget the naked portafilter for easy troubleshooting.