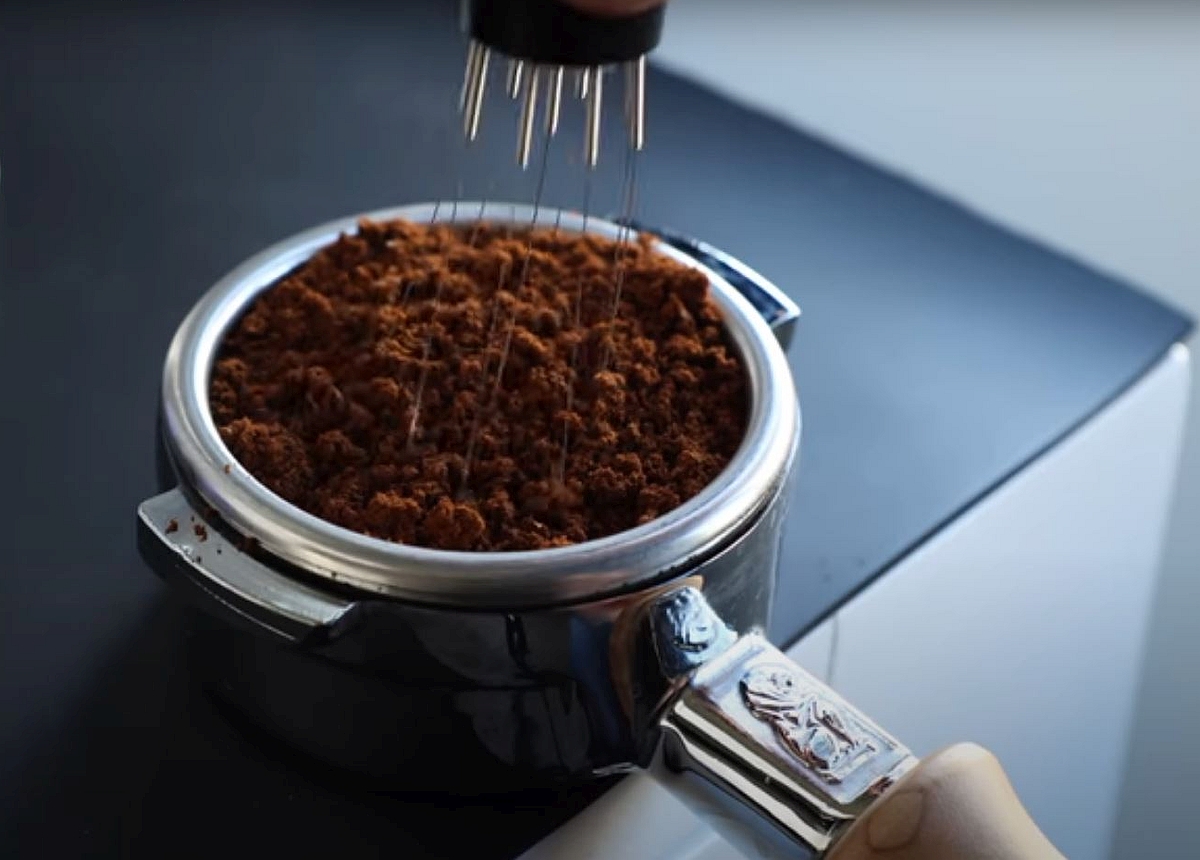 The Weiss Distribution Technique is one of the ways we can improve an espresso shot, beyond the run-of-the-mill shot.  The technique uses one or more needles to stir the ground coffee, for obtaining a perfect distribution of the grounds, with the aim to improve espresso extraction.

What Is the Weiss Distribution Technique

The Weiss Distribution Technique is a method of de-clumping and distributing the ground coffee in the portafilter. The acronym WDT names both the technique and the tool used to de-clump.

WDT helps with the deep distribution of coffee in the portafilter. There is another distribution technique, called puck raking, which will only distribute the grounds at the surface of the puck. Deep WDT using a Weiss distribution tool is the best technique.

Ideally, we should use both deep WDT and leveling for the puck prep.

What Is a Weiss Distribution Tool?

A WDT tool is device with one or more fine needles, used to rake ground coffee in the filter basket, before tamping. Before the WDT tool became a thing, and we couldn’t buy it from the market, people used to make their own.

The simplest WDT tool is a single needle, which you can improvise from a paper clip, Some folks have made their own WDT tool with acupuncture needles, or dissection needles. So really, anything that can provide a deep raking and stirring in the coffee bed, is fine.

The modern, commercial, WDT tool is a rake with many fine stainless steel needles, that can reach the bottom of the portafilter basket, in order to distribute coffee grounds. The modern tool is efficient, ergonomic, and is a great looking espresso tool.

The history of the WDT dates back in the 2005, when espresso making was still an approximation, and home baristas were investing themselves into researching and improving the espresso extraction.

The device bears the name of the inventor, John Weiss, a PhD in Biochemistry from the Vanderbilt University.

Back in the 2005, everybody was obsessed with surface distribution, but John Weiss recognized that coffee grounds clumps were at least partly responsible for a poor extraction. It took a few years for his method to gain traction, although some of the espresso aficionados understood the importance of  the WDT and continued using it.

The mass popularization of the technique was only done in the recent years, via a few specialty coffee social channels. Some of these are: Scott Rao, Decent Espresso, Matt Perger, Jonathan Gagne, but many others have also contributed.

Yes, WDT improves extraction, and reduces channeling. If you like to pull perfect espresso shots, then you need to use the Weiss Distribution Technique.

There is a debate among coffee professionals, regarding the WDT. Some professional baristas claim that the extraction improvement is not worth the extra effort. There is an extra step in the puck prep, and this adds complexity and time to the already complex process or brewing espresso.

As we pointed out earlier, there are a lot of espresso experts that think the Weiss Distribution Technique is  worth the extra effort, and it will improve the extraction. We will get to the technical details in a bit, for those who want to understand why.

How Does the WDT Work?

WDT works by distributing the coffee grounds evenly in the filter basket. Originally, John Weiss used the technique to break up coffee clumps after grinding. At the time, the espresso grinders didn’t have the features we see today, and darker roasts would invariably form little clumps. These clumps would not get saturated with water as fast as the rest of the coffee bed, hence the extraction was incomplete in the clumps.

Today, we understand that raking in the coffee bed distributes the grounds evenly, beyond just breaking the clumps. The other thing it does is it increases the puck resistance, and the shot will pour slower. This increased puck resistance might in fact mean that we do not have any micro-channeling, and coffee extracts as close to perfection as possible.

We don’t actually know what happens in the espresso puck, but it’s reasonable to assume that in a puck that wasn’t prepped with the WDT tool we could have dozens of micro channels, hence a slightly faster pour because of that. Once we prep the puck with the wdt tool, there are no more low resistance points, hence extraction is even.

How To Use a Weiss Distribution Technique Tool?

Using the WDT too is quite simple, and self explanatory, but there are a couple of things that are not obvious to the beginner. Nothing that can’t be adjusted as you go though. Here are the steps:

Note that this how to is for the deep DWT, and we touch on different techniques later in the article, and we show why deep WDT is the best.

It might seem like the technique is simple, and there is not much variation, however, humans are innovative, and they always try to improve processes. This is also true for the use of the humble coffee stirrer.

The three methods that are used in the espresso community are:

I personally recommend the “Deep DWT”, as it provides the most consistent results, and the extra effort and equipment are negligible. But let’s look at the three methods and see how do they compare.

Puck racking is a distribution method popularized by John Buckman’s, the owner of Decent Espresso. Puck racking consists of using a DWT tool to distribute the grounds at the surface, without going too deep. Buckman’s idea is that WDT was invented for de-clumping, and today’s grinders don’t produce clumps anymore. So the aim is to create a nice surface ready to be tamped.

Shallow DWT is the creation Scott Rao, and it is a similar technique to puck raking.

Here is the original technique. https://www.instagram.com/tv/B-QPq0mJd9d/

Deep DWT is the original method, as devised by John Weiss. The aim is to go as deep as possible in the portafilter, and stir the grounds to not only break clumps, but also obtain a more uniform distribution. The risk with this method is that it’s easy to create low density zones, but stirring in a circular motion helps avoiding that.

In a lengthy post on the subject, Johnathan Gagne from Coffee ad Astra, demonstrates that Deep DWT is the best distribution method, and provides the most consistent results. Using a Decent espresso machine, taking a scientific approach, and measuring the variables for enough shots to validate his results, he has on that page the graphs that show that Deep DWT works the best.

You can make a WDT yourself, if you want to save a few bucks, or just because you like doing things with your hands. Here are a few community attempts on Reddit, and my advice if you want to make it yourself.

If you want to build it yourself, you can probably do it in the next 5 minutes. Even a bad one will still be better than none. So do it now and come back and thank me in the comments. You can use a cork and toothpicks.

After you build that first one that costs nothing, please do yourself a favor and upgrade your tool. Here are a few guidelines.

If you have access to a 3D printer, you can make an elegant WDT tool. But a cork or wood handle are perfectly fine too. Whether it’s cork, or wood, make sure you glue in your needles, for sturdy and long lasting tool.

Here is the link to a 3D WDT model, if you own one and you want to create this.

If you care about espresso perfection, just start using WDT now. Pair it with an espresso puck leveler, the other type of coffee distributor, for best results.

You can make it yourself, if you are into DIY, or you can buy one, there are dozens of models on Amazon and Etsy.

If all you need is a strong shot to get you started in the morning, and the taste is not that important to you, you probably don’t need a WDT.